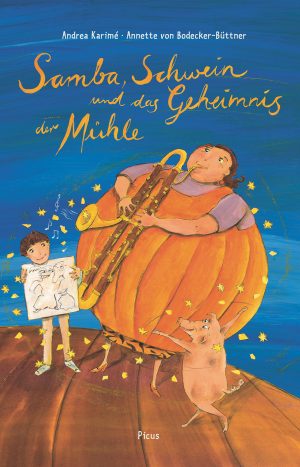 €15,00 inkl. MwSt.
Cover Hardcover
Size 56 Pages
Format 16,5 x 24,5
ISBN 978-3-7117-4003-8
First published 2018
»Samba, Pig and the Mystery of the Mill«
Annette von Bodecker-Büttner’s imaginative illustrations turn Andrea Karimé’s exciting detective story into a colourful delight!
Samba has been bored ever since his friend Lâl moved out of the flat next door. But when aunt Ottilie – round and red as a pumpkin – moves in and plays her bassoon the days shimmer like a golden treasure. She even has a pet pig! Called Pig! But that’s a secret. One day aunt Ottilie suddenly vanishes. And then Pig runs away from Samba! So Samba chases after Pig and they come to a halt in front of the old mill. Maybe those sinister figures with their long coats have something to do with aunt Ottilie’s disappearance?
Licence Categories